Can I still go to jail if I am caught with marijuana? 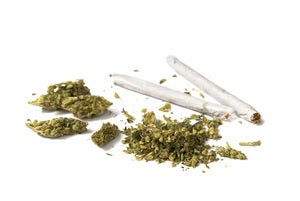 Can I still go to jail if I am caught with marijuana? I get this question quite a bit now.  The answer is maybe.  The penalties for possession of marijuana have changed recently.  But, depending on the amount or circumstances, it still may carry the possibility of jail time.  First, however, it is important to know the difference between felony and misdemeanor possession of marijuana.

A couple of years ago, though, the legislature modified that law so that the maximum time of incarceration for possession of less than ten grams of marijuana was ninety days.  Possession of ten grams or more was still punishable by up to a year in jail.

In 2014, the legislature made a further modification.  Now, possession of less than ten grams of marijuana is only punishable by a civil citation that carries a fine.  There are, however, two exceptions to that new law.  If you are under the age of twenty-one or if you are twenty-one or older and it is your third or subsequent time to be charged, the court is supposed to set your case in for trial.  However, nobody seems to have a clear idea of what that means. It may mean the penalty is still a maximum of ninety days for those exceptions or that you have to come to court to face the charge but you still only face a fine.  So, there is no clear answer to that question without knowing more about the person who has been charged.  The law is unclear and, frankly, a bit frustrating to those in the criminal justice system.

However, it is clear that prosecutors and police officers have begun to treat marijuana in a different manner since the passage of this new law.  Whether this is the first step towards the complete legalization of marijuana remains to be seen.

‘My Story ': A Conversation with Marshall Henslee, Founding Partner, The Law Office of Marshall T. Henslee LLC Why did you decide to become a lawyer? I guess you could say I have always wanted to be a lawyer -- ever since the 6th grade, at least, when my best friend and I imagined starting a pra...

Thank you for contacting us. We will get back to you shortly.

Please complete all required fields below.

Marshall T. Henslee Is Here for You

At The Law Office of Marshall T. Henslee, I focus on Criminal Defense, Drinking & Driving, Internet Crimes, Traffic Violations, Drug Crimes, General Felonies & Misdemeanors, Federal Crimes, and Accidents/Personal Injury and I am here to listen to you and help you navigate the legal system.

I offer a free consultation and I'll gladly discuss your case with you at your convenience. Contact us today to schedule an appointment.